The Royal Society is the world’s oldest independent scientific academy in continuous existence, dedicated to promoting excellence in science.

Founded in 1660, it was granted a royal charter by King Charles II and today fulfils a number of key roles: promoting science and its benefits, providing scientific advice for policy, and fostering international and global co-operation.

Many of the Society’s events take place in the main lecture theatre at its Carlton House Terrace offices, a 180 square metre multi-use space which was felt to be in need of modernisation. The existing sound system of on-wall passive speakers reinforced by a grid of ceiling speakers was outdated, and lacked the articulation to be properly intelligible in all areas of the room, resulting in several dead spots.

Having made a decision to overhaul many aspects of the building’s technology, the Royal Society’s technical team turned to Winchester-based Whitwam AV Integration, established in 1909 and providing bespoke technology solutions for over 35 years, with whom the Royal Society has had a long-standing working relationship. Whitwam proposed an integrated audio system centred around K-array loudspeakers and amplification.

The Society’s introduction to the Italian loudspeaker manufacturer’s products came previously when an external client had brought in a K-array system and deployed it on speaker stands around the building. Whitwam director Andrew Pymm said: “They were impressed with the sound quality and the sleek looks, and asked for a demonstration to assess individual products in more detail. At this stage I brought in Dave Wooster of K-array’s UK distributor 2B Heard. I invited him to come and look at the site, take some measurements and prepare some EASE simulations. We then went up to Carlton House Terrace with a selection of speaker products he felt would be suitable, and arranged a live demonstration.”

Having identified a seven or eight week summer period when the building was effectively quiet as a result of other facilities’ refurbishment, Pymm and the Whitwam team set about preparing the bigger project plan which extended to a comprehensive audio and video overhaul – including speaker systems, new 4K laser projection, a new curved Cyclorama screen, 4K high definition cameras, and fibre infrastructure.

“As well as being the focus of the UK’s scientific community, they are also well aware that they are able to offer a premier London hospitality venue, and that their external clients expect the highest quality in technology,” said Pymm. “So our brief was to deliver a completely integrated system that would cater for the multiple uses of the space – such as conferences, lectures, live Skype events, presentations, cabaret events, awards ceremonies and dinners – and essentially create a blank canvas in which these many activities can take place.” 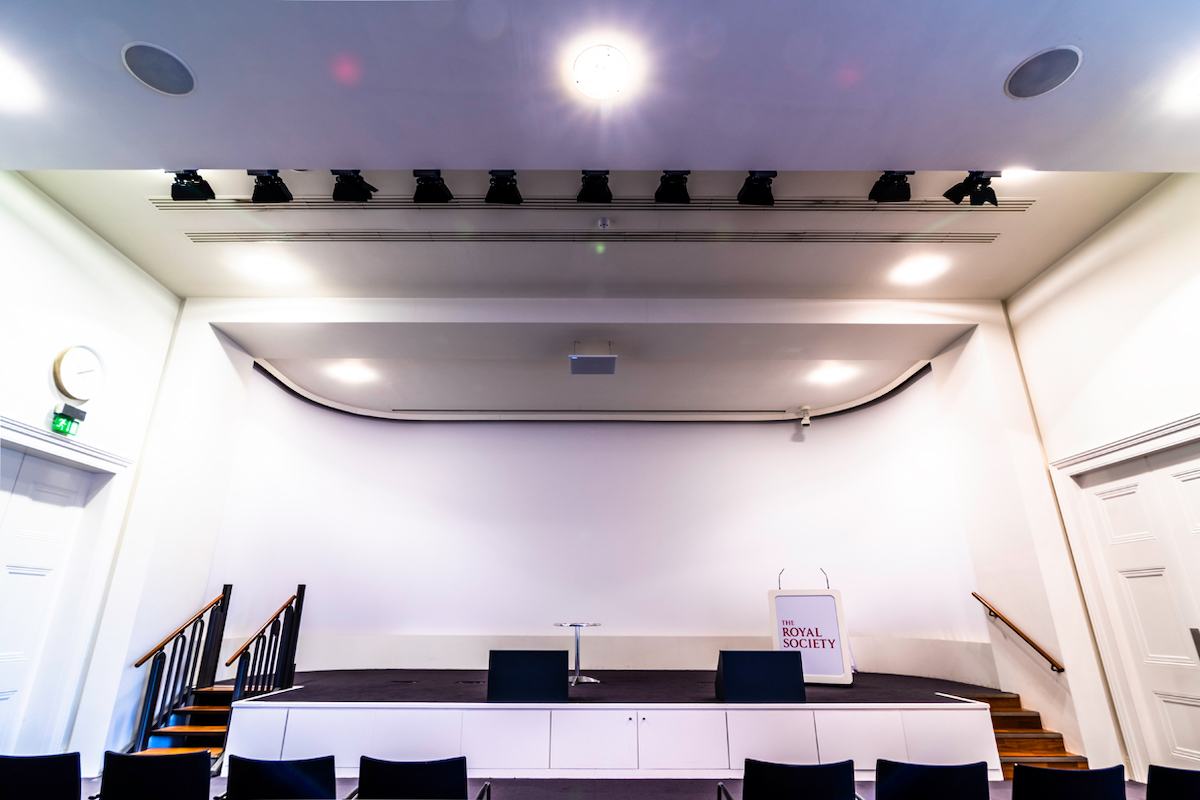 Because the room is used for so many different types of event, the sound system was designed to provide separate zones which can be operated independently or in combination, and various configurations can be recalled instantly from a touch screen. Main programme audio is delivered via a pair of Domino-KF210 full range speakers mounted on the wall at left and right behind the cyclorama screen which, in combination with custom acoustic panelling to control the stage acoustics, provide a clear focus and directionality of the programme sound.

A couple of metres in front of the stage, double-stacked Viper-KV52 columns reproducing speech only are wall mounted left and right on custom fabricated CNC-routed wedges, designed to give a subtle inward angle and be virtually invisible against the décor.

Further down the room there are two sets of Kobra-KK102 one-metre-long line arrays on each side of the building, and for low frequencies there are Rumble-KU210 dual 10-inch subwoofers and Rumble-KU26 dual 6-inch subwoofers concealed in wall recesses beneath them.

Underneath the overhanging control booth, which previously was a difficult to reach sonic dead spot, a pair of ceiling mounted Viper-KV25 sub-miniature speakers provide improved clarity for those at the back of the room.

The system is augmented in part by the existing ceiling speakers so that when the room is arranged for dinner events, background music can create the ambience while a video presentation can provide the primary audio focus. For Q&A sessions the processing allows for handheld microphones to be routed to the Dominos so that speakers on stage can hear the questions clearly. The speaker system is zoned to allow individual speakers to be attenuated or muted if necessary, and specific configurations can be recalled via presets for particular room applications.

“When we fired it all up it sounded great,” said Pymm. “The EASE calculations worked out well, and once our colleague Dan Draper had carried out final measurements and alignment it sounded amazing – there’s a crispness and directness to it, you could almost cut the sound with a knife. It’s really clean and clear, while visually the space is still preserved as a clean white canvas.”

Liam Helm, AV manager at the Royal Society, is delighted at the improvement in sound quality. “It’s night and day, it’s a totally different environment now,” he said. “There is so much headroom on tap that we never have to worry about people who don’t naturally project well, or not being able to hear people in the room. The technicians are getting used to the idea that you don’t have to run the audio so hard – and in fact it works better when you don’t.”

Given the relatively high density of speakers in the room, the K-array system was specifically designed to cope with all eventualities, and as such to be capable of substantial sound level. For a recent investment company’s panel debate on the subject of designer humans, the client had selected Human by the Killers as a music intro. “When they came for a site visit and wanted to hear the track played through the K-array speaker system, they didn’t need any convincing that they were going to get the impact they wanted,” said Helm.