One of Scotland’s most historic cathedrals has been equipped with a comprehensive new AV system that, among other things, has significantly improved sound reinforcement.

Regarded as the Mother Church of Presbyterianism, St Giles’ Cathedral in Edinburgh is an important place of worship for the Church of Scotland, its crown-shaped spire a distinctive part of the city skyline. The present building dates from the late 1300s and features a number of chapels, including the Chapel of the Order of the Thistle, Scotland’s chivalric company of knights appointed by Her Majesty The Queen. 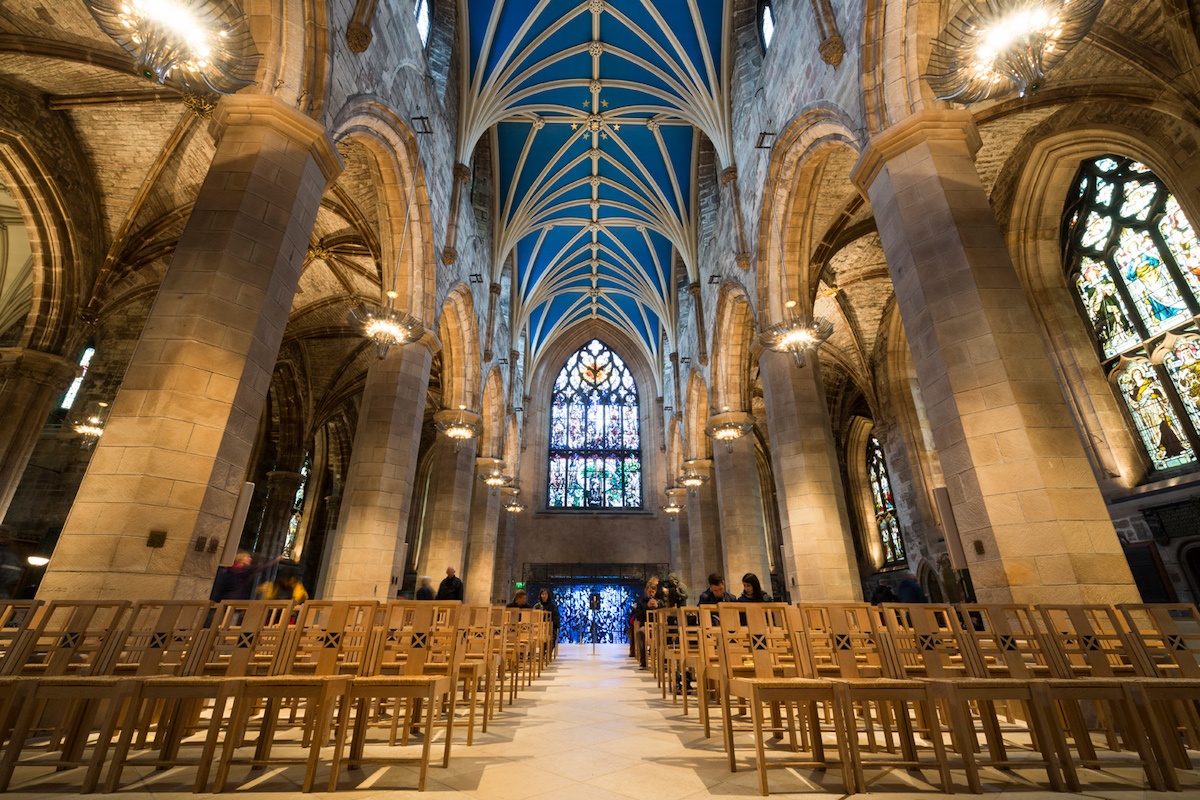 As audience expectations rise in parallel with developments in audio technology, installing sound reinforcement systems that satisfy modern demands in historic buildings is always fraught with potential difficulties. The St Giles’ installation has demonstrated how these issues can be overcome, delivering a solution that is effective and also includes a large degree of future-proofing.

“Cathedral and church related projects tend to take time, because there are statutory bodies involved whose permissions must be obtained and invariably there is a need for funding to be put in place,” says Hyland. “Although initial discussions took place back in 2007, it was known that the project would be dormant for some time. The project resurfaced in 2015 and began with discussions to establish the cathedral’s audio, CCTV and video distribution requirements, which formed the basis of the client brief.”

While the timescale between submitting proposals and getting a sign-off can be protracted, in this instance, Hyland says that “it was more or less by return”, highlighting the importance that the cathedral placed on getting the project under way as quickly as possible.

Once the go-ahead was given, two specifications were produced for tender purposes – one for the supply and installation of the cabling by an electrical contractor and the other for the equipment. The contract to supply, install and commission the equipment was awarded to Whitwam AVI, part of the Winchester-based Whitwam Group, in January 2017.

Compared to many such projects, the installation timescale was very compressed – just three months. Sourcing, setting up and configuring the system elements in the company’s workshop and then transporting them over 400 miles to Edinburgh inevitably added to the pressure on Whitwam, but the company’s long experience with such projects meant that everything was completed on schedule.

The 26-zone system is based on a Dante network, managed by a Yamaha MRX7-D matrix processor with input/output expanders. It also includes four Yamaha power amplifiers, plus compact input/output rack units. 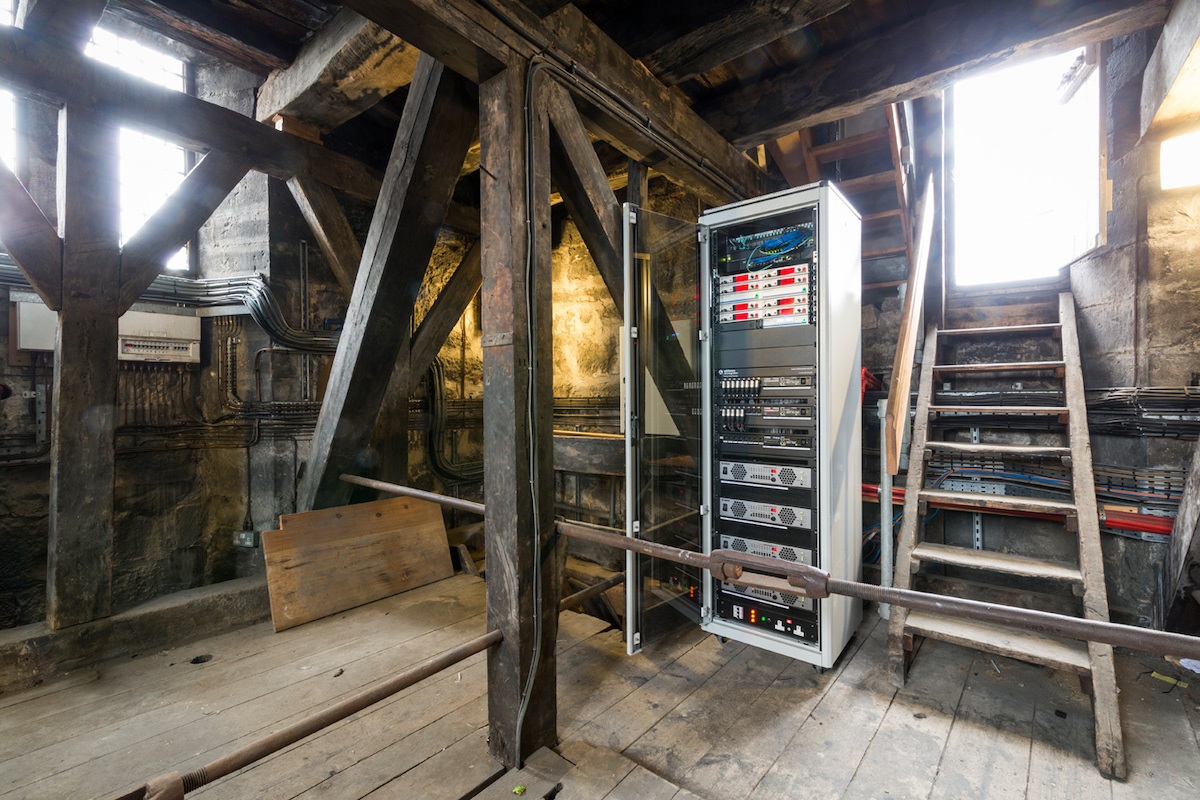 “The superior DSP and flexibility of the Yamaha products, along with the ability to easily implement future changes as and when required were factors in making the choice,” says Hyland. “The MRX7-D offers a palette of facilities from which you can pick what you want. On some projects, it is easy to underestimate what is needed in terms of programming and the MRX7-D ensures that anything can be achieved in a quick, straightforward manner.”

Sound coverage is achieved by pairs of Tannoy column loudspeakers along the length of the nave and likewise the chancel. Additional loudspeakers provide coverage of the associated side aisles.

Being in a large, reverberant space, the MRX7-D processor provides delay, EQ and other processing as required to each pair of loudspeakers. Further loudspeakers are located in offices and other areas.

Microphone coverage is provided by eight radio mics and three cabled circuits. In the event of users forgetting to switch on one of the Audio-Technica cabled microphones, the Beadles (cathedral officers) can do this via a duplicate switch on any of the touchscreens.

The installed radio mic inventory consists of five Sennheiser lapel models, along with two other units: a Sennheiser e865 handheld, and an Audio Technica ES935/ML microphone used with an SKP300 plug-on transmitter. Six Sennheiser A2003 aerials have been installed to provide comprehensive UHF coverage.

Outputs from the system – including those from overhead ambient microphones in areas where the choir sing – also feed induction loop zones for the hearing impaired in the nave and chancel, as well as media recording devices.

The appropriate microphone can be selected and be fed to the loop system. In the absence of speech or music, hearing aids receive the general ambience of the cathedral instead of silence.

Line level outputs have been installed in the roof void. These provide a feed from the cathedral system for hired systems, which can be rigged temporarily to give loudspeaker coverage beyond the cathedral’s west front.

Five Panasonic HD PTZ cameras provide the organist and the Beadles with views of the key areas in relation to services and other events. Switching the CCTV system on automatically moves each camera to a preset default position, which maximises the view of its associated area.

An output from each camera is connected to a Genie HYHDVR multi-channel logging recorder. The recorder can be accessed from a desktop computer in the Beadles’ office, enabling camera outputs to be viewed live, recorded material to be played back and sections downloaded to DVD.

As with most historic venues, aesthetics were as important to St Giles’ as the sound. Indeed, Hyland acknowledges the irony that the Yamaha equipment is making a radical improvement to the cathedral’s sound, yet the public will never see it.

“Where they existed, the cabling contractor, Edinburgh-based CableCom Electrical, followed routes used by the previous system’s cabling – for example through the roof vaulting, around arches and so on. Connection boxes and other infrastructure were also kept to a minimum,” says Andy Pymm, Whitwam Group’s director of AV integration.

To reduce the volume of cabling and the extent of the runs, equipment was de-centralised and instead, racks were installed at three key locations – the North Porch, the Bell Tower and the base of the organ – interlinked by a fibre backbone. Two multi-core fibres are installed between each of the rack locations to provide resilience and flexibility.

The majority of the horizontal cable runs are at roof void level where they have been installed on cable trays. From the trays, there are cable drops on pillars to the loudspeaker positions. 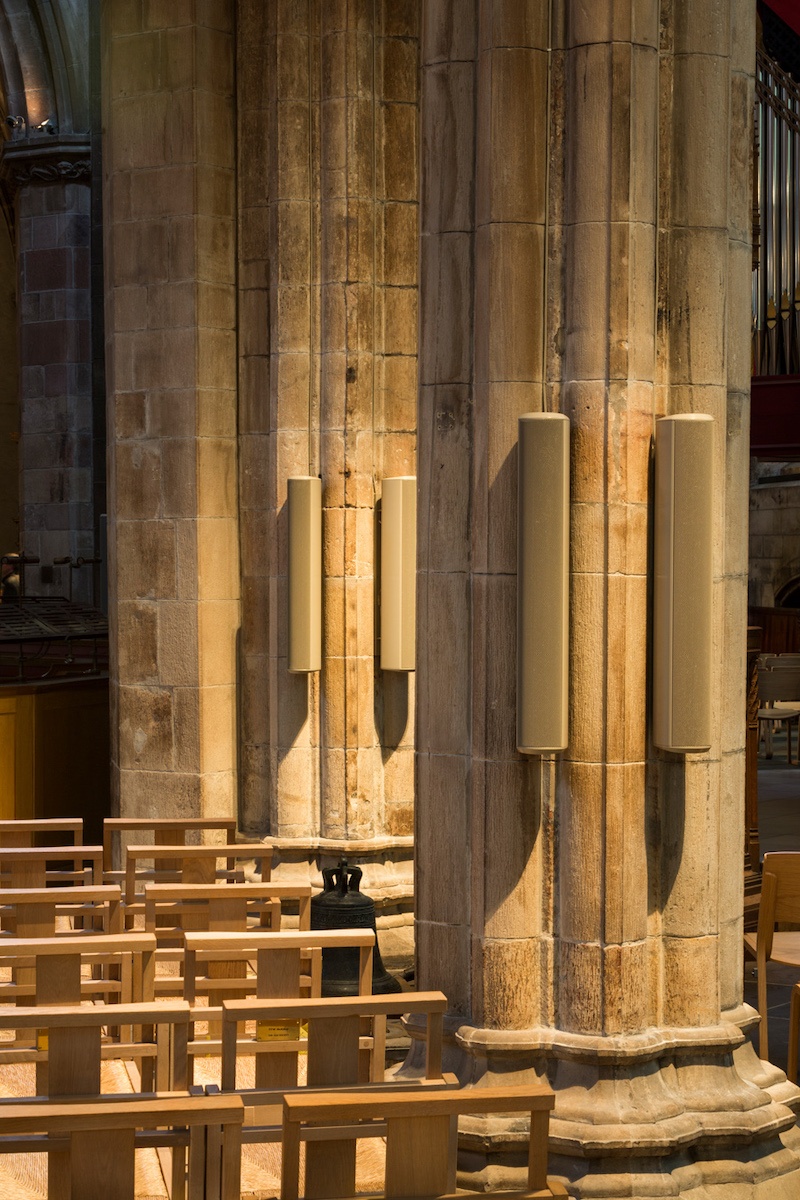 Pymm continues: “Visible elements were painted in colours to match the surfaces on which they were mounted, the colours being specified by the architect [Edinburgh-based Studio Tristram]. This was complicated by the cathedral’s different phases of building – there are three different styles of pillar, so we had to produce three different types of bracket, loudspeaker mounting and use three different paint colours. The radio microphone aerials and base plates were also painted so they disappeared.”

This ‘vanishing trick’ also applied to the system racks. A decentralised scheme was designed to reduce cabling runs. Two 24U racks, located in a lobby area on the cathedral’s north side, house all the user-accessible equipment like the touchscreen monitors, a Tascam recording/playback device, video controls, Ampetronic induction loop amplifiers and the system’s aux inputs and outputs, as well as the Yamaha matrix, extenders and a power amplifier.

The main 42U rack – containing the receivers for all the radio microphones, plus the Yamaha amplifiers and I/O units – provided a bigger challenge, being located in the clock chamber at the top of the cathedral’s Bell Tower. “We had to build, wire and test the rack in our workshop, then transport it to Edinburgh, take it apart, carry the components up a spiral staircase, across part of the roof, into the tower and reassemble it all,” says Pymm, with a slightly rueful smile.

The new system has completely changed how St Giles’ manages its sound reinforcement. The previous, single loudspeaker zone system was based on voice-activated microphones and had been effectively, as Hyland puts it, “switched on and left on autopilot.”

“When one microphone was being used, sound from the loudspeakers activated the unused microphones. This increased the reverberant sound level significantly which, in turn, reduced intelligibility. The single zone loudspeaker zone exacerbated the situation, given that loudspeakers covering unoccupied areas could not be switched off. As a result, you ended up with sound rattling around the cathedral,” he says.
In contrast, the new solution ensures that the sound is limited to the areas where it’s actually needed for any particular service or event.

“Each of the three fixed microphone locations have local on/off switching for operation by the user, while the whole system can be controlled by the cathedral’s Beadles via a Crestron touchscreen or iPad app,” says Pymm.

“Most of the time only a single microphone is in use and the MRX7-D is programmed to restrict the sound to the area where it’s needed. However, there are presets for a variety of different uses and a lot of DSP is being used – the MRX7-D is using 97% of its DSP capacity.”

As well as the audio, the Beadles can use the touchscreens or iPads to control CCTV, video and other related systems. There is also a touchscreen by the organ console, which provides control of audio and CCTV elements specific to the organist.

A Crestron CP3N processor provides control over the various audio and video elements, such as loudspeaker zones, cabled microphones, radio microphones, reproduction levels and their visual indication, record/replay facilities, CCTV cameras, video distribution and so on.

The project was completed at the end of March 2017, on time and within budget. It significantly improves the audible experience for worship and the range of other events for which the building is used.

“The system and the related facilities are devoid of ‘bells and whistles’. However, flexibility and futureproofing were keywords. The facilities installed are far more comprehensive and flexible than those in other cathedrals of a comparable size,” says Hyland.

“People are very quick to complain about bad sound, but when reinforced sound is high quality, or so natural that people don’t realise it is being reinforced, of course they don’t say anything,” he smiles. “There have been compliments and very positive comments from both the congregation and also those with hearing impairments. For the first time, hearing aid users can now clearly hear not only speech, but also the music and ambience of the cathedral.”

“Yamaha continues to be our go-to DSP solution,” adds Pymm. “Their range of processors provides great flexibility in the way we can programme them, the systems can be integrated extremely well with video recording, playback and other devices, plus they’re extremely reliable.”

This article is by kind permission of The Minister & Kirk Session of St Giles’ Cathedral.